Many actors have parted ways in recent times from ‘Taarak Mehta Ka Ooltah Chashmah’. There are reports of a rift with the creative team behind leaving the show. However, nothing has come out clearly on this from both the sides. Actor Shailesh Lodha, who plays Taarak Mehta, also said goodbye to the show a few days back but fans still miss him. Producer Asit Modi had said on the actors leaving in this way that if someone goes, it hurts but they cannot stop anyone. Amidst all this, now Shailesh Lodha shared a post on social media which is being considered as a taunt on his behalf.

Apart from being an actor, Shailesh Lodha is also a very good poet. Reading and listening to his poems, one gets to know the condition of his heart. His displeasure is clearly visible in the latest post shared by Shailesh. For whom he has said these things, it is not clear but users have started guessing and are seeing it by associating it with Modi.

Shailesh Lodha shared a poster on which it is written, ‘The deceit done to a simple person opens all the doors of your ruin. No matter how great a chess player you are. He captioned, ‘Tomorrow or not today… God sees all.’ 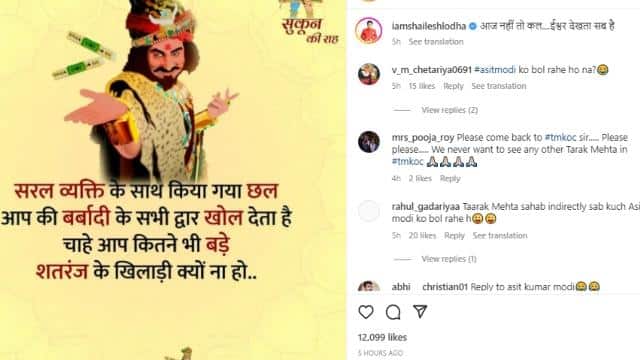 A user commented on Shailesh’s post, ‘Asit Modi is speaking, isn’t it? ’ Another said, ‘Taarak Mehta sahib sab kuch asit modi ko bol rahe rahe hai’. One said, ‘This is the answer to Asit Kumar Modi.’ One user writes, ‘Sir, some people tell lies too easily, you do not think it right to tell the truth.’ One wrote, ‘Sir, this is probably the answer to why you left the show.’