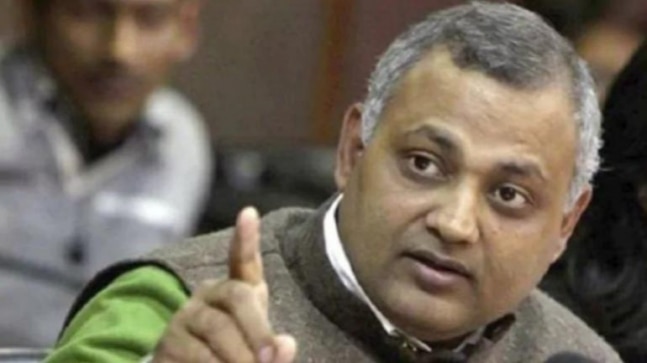 The Aam Aadmi Party on Wednesday alleged lakhs are being sought as bribes under Delhi Lieutenant Governor VK Saxena’s watch for land registry in the PM UDAY scheme in the Delhi Development Authority (DDA).

The AAP has now called for a probe into the matter. AAP MLA Somnath Bharti, who is also a DDA member, raised the issue of the alleged scam before the Delhi L-G at the DDA meet today.

The AAP MLA alleged that the Delhi L-G, as the chairman of the DDA, must find out how such a huge scam is taking place in an organisation run by him.

In the last 3 years under the PM UDAY Yojana, DDA has done only 15,000 so far, Bharti said, adding that at this rate, it will take 160 years to do all registries (eight lakh).

Vacant government land has been fraudulently registered in the name of private parties under PM UDAY and DDA has identified 364 such plots, he said.

“This is a bigger scam than it seems, with land mafias and prominent leaders having got land registered under PM UDAY illegally. This scheme turns out to be as ineffective as other schemes like for the safety of women. Upon raising these questions in front of the entire DDA committee, nobody had an answer to these questions,” Bharti added.

In 2019, the PM UDAY scheme was launched by Prime Minister Narendra Modi. Big hoardings with the photo of PM Modi across Delhi promised homes to 50 lakh people.

“According to the government rate list, if the size of the property is less than 100 sq metres, then it would cost Rs 800. If it is more than 100 sq m but less than 250 sq m, it would cost Rs 1000. Properties sized greater than or equal to 250 sq m would cost Rs 2,500. A person who had 45 sq m was charged Rs 2,950 inclusive of GST and SGST. It should have cost him Rs 800 but instead, he was charged Rs 3,000. I handed over the proof personally to him in today’s meeting. Think if they charge the same for the entire 15,000 registrations, then the entire scam is worth Rs 150 crore. They had nothing to say when I told them that with every registry, a minimum of Rs 1 lakh is being charged as a bribe by the DDA,” an AAP MLA who was present during the DDA meet said.

“I also said to the L-G that if you send someone to visit any of your centres, you will see how poor people are being exploited. A poor person visited the Deer Park facility of DDA six times on his cycle from Mehrauli. Imagine how insensitive this government is when they don’t care at all about the poor people. They take around Rs 10 lakh as a bribe for a bigger plot size, which means that for eight lakh people, this is a scam of Rs 8,000 crores on the lowest side. It then becomes the duty of the L-G to thoroughly investigate the money trail and find out which ministers are involved in this scam,” Somnath Bharti said.

Lakhs being sought as bribes under L-G's watch for registry in PM UDAY scheme in DDA: AAP