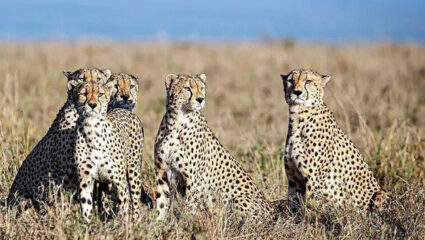 New Delhi, Cheetahs are going to come soon after 70 years on the soil of India. Significantly, a special jumbo jet B747 has also reached Namibian capital Windhoek to bring Cheetah. It is worth noting that this aircraft has been specially designed for cheetahs not only from outside but also from inside, so that cages can be kept in it easily.

A special charter cargo flight of Cheetahs coming from Namibia will now land at Gwalior. Earlier it was to land in Jaipur on 17 September. Cheetahs will be brought to Kuno National Park Sheopur by helicopter: SP Yadav, Project Cheetah Chief pic.twitter.com/vgUn438Cep

On the coming Friday i.e. 17th September, this aircraft will land directly from Namibia to Gwalior after taking a 16-hour flight, which was earlier going to reach Jaipur directly. On this day the Prime Minister of the country will drop them at Kuno Park. There will be enough space between the cages so that the vet can easily keep an eye on the cheetahs during the flight. These cheetahs will be brought to India empty stomach. According to experts, the animal’s stomach should be empty during shifting.

#WATCH , First look of Cheetahs that will be brought from Namibia to India on 17th September at KUNO National Park, in Madhya Pradesh pic.twitter.com/HOjexYWtE6

While there has been a slight change in the schedule, now a special charter cargo flight of cheetahs coming from Namibia will land at Gwalior. Although earlier it was to land in Jaipur on 17 September. After this the cheetahs will be brought to Kuno National Park Sheopur by helicopter. Along with this, the first glimpse of these upcoming magnificent cheetahs has also started appearing in social media.

While monitoring cheetahs in Namibia, Prof. at the University of Pretoria, South Africa. Adrian Trodiff said that 8 cheetahs coming to India are currently in the CCF circle (forest protected area). There are 5 females and 3 males. These two are real brothers. Namibian veterinary doctor Anna Busto is coming together in the plane to bring the cheetahs safely.

Significantly, on the occasion of his birthday, Prime Minister Narendra Modi will release three of these cheetahs in a special enclosure built in this park under the Cheetah Replacement Project. Cheetahs were declared extinct from India in 1952.